MIRROR, MIRROR ON THE WALL, IS SUPEROXIDE DISMUTASE THE BEST ANTIOXIDANT OF THEM ALL?

“Mirror, mirror on the wall,

who is the most powerful antioxidant of all?”

Superoxide dismutase is more powerful than you.”

It’s a good thing that vitamin C isn’t the jealous type. It knows that no antioxidant can do the entire antiaging job alone.

But if there’s anyone that can give vitamin C a run for its money and threaten its status as the darling of the antioxidant world, that is superoxide dismutase.

What The Heck Is Superoxide Dismutase?

Antioxidant enzymes are enzymes that behave like antioxidants. Your body naturally produces them when your cells are being attacked by free radicals to reduce DNA damage.

FYI: there are 3 forms of superoxide dismutase: copper, manganese and zinc.

What Does Superoxide Dismutase Do?

Superoxide dismutase is the archenemy of Superoxide radical.

Superoxide is the most common free radical in the body. It’s also the primary trigger of inflammation, a process that destroys collagen and elastin and leaves you with wrinkles and dark spots.

Superoxide is so bad because it has a long life and is very reactive:

Superoxide dismutase hunts down Superoxide and converts it into oxygen and hdyrogen peroxide so it can’t wreak damage on your cells and give you wrinkles anymore. 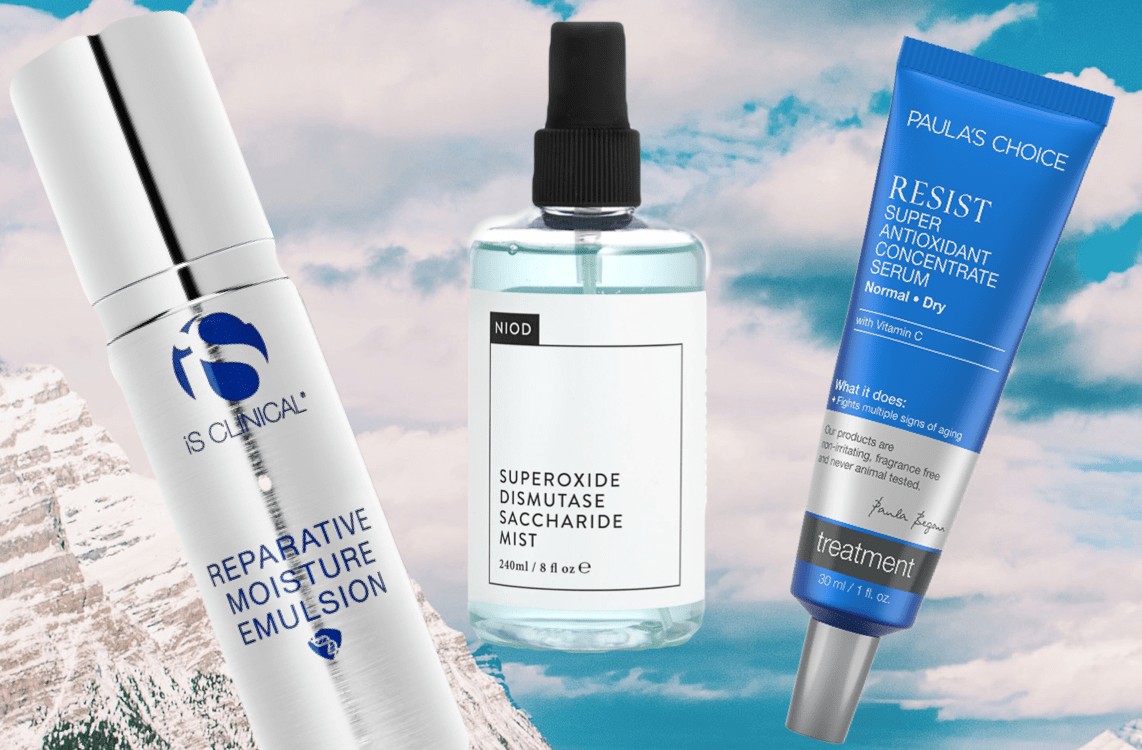 What Are The Best Products With Superoxide Dismutase?

If superoxide dismutase is so powerful, why do so few products have it? Cos it’s very tricky to work with (like vitamin C, it’s very unstable).

But that makes the few products available all the more precious and worth snapping up. Here are my fave picks:

Perhaps the mirror was exaggerating a little when it called superoxide dismutase the most powerful antioxidant of all. But it’s the one that fights the worst types of free radicals so it would be silly to ignore it. Add it to your skincare routine to give your other antioxidants a helping hand. I already have.

Are you using superoxide dismutase? Share your experience in the comments below.

How I Remove My Blackheads

Myrrh: The Skincare Gift Fit For A King

I haven’t seen a lot of focus on Superoxide dismutase -glad you are highlighting it. I used to use the PC Resist serum but it has gotten increasingly expensive since I started with PC a decade ago. I still use it when I travel because the tube is so travel friendly and the silicones are very soothing on my skin. I now use the skinactive antioxidant serum (that you featured in an old post). It also has Superoxide dismutase, and is a bargain at 22USD.

Meg, it’s a shame it isn’t in more serums, isn’t it? It’s one of the most powerful antioxidants out there.

Andrew, I agree. I still get a lot of requests to feature/review Deciem from readers but it’s becoming increasingly difficult to buy the products for myself. I’m finishing using/reviewing what I have and then we’ll see. It’s obvious there’s a problem with mental illness/addiction here and I really hope he can get the help he needs and stop this train wreak.

I’m sorry, I’m late on this post… I would very much like to know what you mean by “…it’s becoming increasingly difficult to buy the products for myself.” when talking about Deciem? I follow all your posts on their products (I bought a lot of them recently), that’s why I would like to know 🙂 Thanks!

Brigitte, I wrote this comment at a time when Deciem’s founder was alienating customers with his erratic behaviour, including insulting customers and anyone who didn’t agree with him. There are plenty of articles around this drama on the internet. But that’s all in the past. Brandon has sadly passed away recently and the company is in different hands now.

Thanks for your response, much appreciated. I love Niod products which I discovered thanks to you 🙂

KYPRIS Antioxidant Dew is lovely (has plenty of Ferulic acid as well) although very pricey. I wish more companies offered smaller amounts with equally smaller costs, especially given that the effectiveness expires.

Fynl, that’s good to know. And I agree. You don’t want expensive products to stop working when they’re still half full. 🙁

does PC have this ingredient, superoxide dismutase, in a serum for combination skin? The Resist line is for dry skin. Thank you!

Kathy, unfortunately I don’t think so. The Resist line is for signs of aging so a lightweight formula like a serum may be ok for combo skin too. If you can, try to get hold of a sample so you can test it before buying.

If I decide to purchase the Niod mist, do I put that on before of after my Vit C serum?

Jean, use it before Vitamin C.

Thanks for the recommendation 🙂 i am giving it a try! Can I use it at night before my retin-a?

Joanne, yes you can.

It sounds amazing! If I purchase the Niod mist and it is unstable like vitamin c, how soon should it be used to still be effective? Can it replace vitamin c completely with all the same benefits? 🙂

Sofie, Niod uses a stable form of SOD so I wouldn’t worry too much about longevity. Just as long as you don’t forget in a drawer for months, you should be fine.

Unfortunately, antioxidants aren’t replaceable. There are many types of free radicals out there, so the more antioxidants you use, the more types you can destroy. If you want to keep your skincare routine short, just use them on alternate days.

Thanks for putting this on the map more widely!

Question: I’ve read that The Ordinary’s “EUK 134” is basically SuperoxideM.

Are there any hints you could give as to where to put it in your routine?

I’ve read the above, but would like to find out more about it, unfortunately too many things I found on the internet are rather vague.

I’d love to use it, but don’t want it to be destroyed too quickly despite applying sunscreen etc.

Thank you in advance!

Christine, if you’re worried, use the NIOD mist. It uses a form of SM that’s stable.

If you want to use EUK, apply straight after cleansing and then sunscreen. You can use something else in between if you need to. Just not acids, as they will destroy SM.

Your skin needs SM but you don’t need to give it a dose every day if you wanna use other actives too.

My understanding is that The Ordinary EUK 134 0.1% is a mimetic of Superoxide Dismutase. Does that mean that it is redundant to use both in the same skincare regimen? If so, is one more effective than the other?

Makemineirish, when it comes to antioxidants, the more the merrier. If you can afford it, you can indeed use both,

hi gio! can i use EUK 134 TOGETHER WITH CAIS, RETINOL, niacinamide & superoxide ?

Camila. yes you can but AGAIN, use only what you need.

and also which one i use first? EUK OR SUPEROXIDE?

Camila, this is redundant. Pick one!!

Check this comp out, from “mydadisachemist” Save or Splurge? The Ordinary EUK 134 vs. NIOD Superoxide Dismutase Saccharide Mist

Hi Gio
Can I use NIOD Survival 30 with Skin ceuticals ferulic C E? Not sure if the superoxide dimutase would upset the vitamin C.
Thanks
Danielle
(PS love the blog and your youtube videos)

Danielle, just wait 10/20 minutes in between application and you’ll be fine.

Hi Gio, I love your blog and emails, read them religiously! I’ve been using this mist for a while, and follow with multi molecular hyaluronic and Timeless Vit C (and copper peptides a few times a week). I’m always rushed in the morning and don’t wait more than a minute or so between each layer. Just reading the above commentary, I’m concerned the SDSM might be impacting the efficacy of the vitamin c? Should I be waiting longer or am I ok to keep on as i have been? Thanks