The Complete Guide To The Ordinary Peptide Serums: Which One Is Right For You?

That’s a tough one. The hype around peptides is… well, 90% hype. When you ignore the manufacturer claims and influencers’ endorsements, there’s not much scientific proof peptides do anything special.

I personally don’t use peptides in my skincare routine. Sure, every now and then I’d try a peptide serum to see what the fuss is about or if a lot of readers request it, but they’re not a regular part of my skincare routine like retinol and vitamin C. Give me what works and keep the hype, thanks.

But, I get it. A lot of you are curious to see if peptides are indeed the new antiaging powerhouses the press makes them out to be. If you’re gonna try them anyway, do it on the cheap.

That’s where The Ordinary comes in. Their peptide serums start at just £5.50, making them the perfect introduction for anyone who wants to satisfy their curiosity without breaking the bank. If they work, awesome. If they don’t, no harm done.

But which one should you go for? Here’s the complete guide to The Ordinary peptide serums to help you choose the right one for your needs: 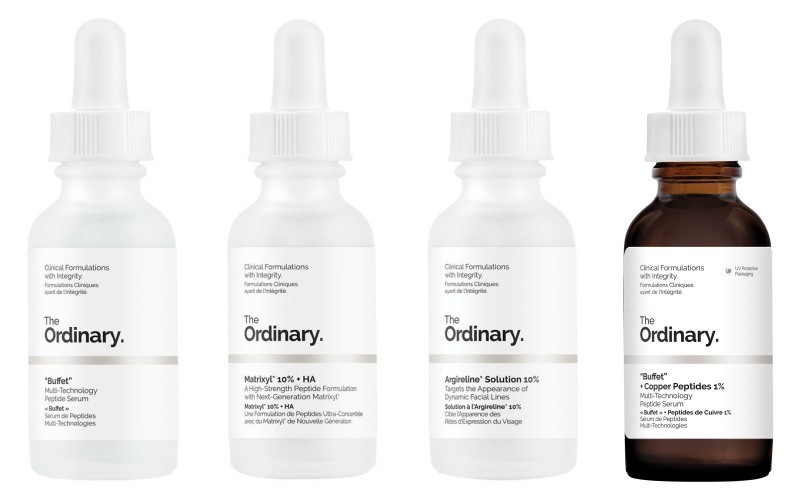 What the manufacturer says it does: Like Botox, it blocks signals from the nerves to the muscles. This way, the muscles can’t move anymore. If they can’t move, expression likes (like forehead wrinkles and smile lines) look smaller.

What science says it does: According to a 2013 studies, applying argireline twice a day for a month can reduce crow’s feet by as much as 48%!

Side effects: Argireline doesn’t penetrate skin well. Only people with thin skin will see an improvement. If you’re young and your skin is thick, you probably won’t see any results at all. (Hint: if you didn’t go through menopause yet, your skin isn’t probably thin enough to see a difference).

Who should use it: Mature women with thin skin who want to relax their expression lines.

Related: Spotlight On Argireline: Is It Really An Alternative To Botox?

What the manufacturer says it does: Matrixyl stimulates collagen production and reduces the appearance of wrinkles.

What science says it does: Not much. The only studies I’ve found were done by the manufacturer. They show that Matrixyl boosts collagen production indeed (at least in rats).

Side effects: A waste of money if you don’t get the results you want. Personally, I’m waiting for more independent studies confirming its collagen-boosting properties before adding it to my skincare routine.

Who should use it: Personally, I’d skip this one. But if you’re already using your retinoids and vitamin C and still have money to spare, I guess you could give it a go.

What the manufacturer says it does: Let’s examine the peptides one by one:

What science says it does: Not much. Apart from the Argireline study I mentioned above, I couldn’t find any independent research supporting the claims for the other peptides. All the studies seem to come from the manufacturer.

Side effects: Again, peptides aren’t dangerous for your skin. It’s your wallet you should worry about.

Who should use it: I don’t really recommend Buffet unless you have the money to spare. If you’re curious about peptides, it’s a cheap way to test what they can do for you.

Related: What Type Of Peptides Work Best To Repair Skin?

What the manufacturer says it does: Copper peptides activate a lot of functions in the body, including wound healing, collagen production and anti-inflammatory responses. They keep skin in a constant state of repair. What about the other peptides? They’re the same ones in Buffet, so go read the section above. 🙂

What science says it does: A 2015 study shows that copper peptides soothe skin, help wounds heal faster and boost collagen. As for the other peptides, there’s no much proof they do anything.

Side effects: Using too much copper can have the opposite effect and make you age faster. Use the serum only a few times a week to be on the safe side.

Who should use it: If you’re past 40, are already using proven collagen boosters like retinol and vitamin C, but feel like there’s more you can do to keep your skin in top shape, investing in a copper peptide serum may make sense.

Confused about The Ordinary? Click on the image below to subscribe to my newsletter and get “The Ordinary Products Guide” Cheatsheet:

What’s your fave peptide serum from The Ordinary? Share your pick in the comments below.

Can This Cute Panda Make Your Dark Circles...

“Buffet” can increase facial hair. I had a lot of peach fuzz and sideburns which would have been the pride and joy of Elvis. All reversible, but not so lovely. Apart from that, I didn’t see any effect.

Maja, oh no! Sorry to hear you experience that. Thanks for letting us know.